Muhammad, who seems to know literally everyone, keeps taking me a-visiting. We’ve met a lot of his family (he is one of 33 siblings – I kid you not). His relatives have all been lovely and, in the way that Muhammad seems to relate to me too, they have laughed at me kindly for a while. A tendency which I wholeheartedly approve of, because it makes me feel less nervous about getting something wrong. What I also like a lot, is how social the homes are which I have seen – people wander in and out, there is no meal which isn’t attended by at least half a dozen people and the family is both extended and extensive. Thus, I have taken to locking myself in my room for a few hours a day. I don’t know what one would do as full time Nigerian introvert, maybe you just hide in your own head.

He has also now taken me to visit four Emirs (kings) – two Third-Class, two First-Class. Second-Class Emirs do not seem to exist, I asked and everyone looked blank; and why should Protocol follow logic, after all. Anthropologically speaking it is an opportunity of a lifetime and I only wish I hadn’t been so knackered each evening we were on the plateau, after a whole day of clinical service then formal visits, that I didn’t make more notes afterwards. Which is a tendency perhaps, of a former time, when cross cultural curiosity was unfortunately less critically analysed. Quick, hide the television, the anthropologists are coming and so forth. But then my training was in a department where anything written post 1979 was considered an upstart attempt at post-modernism.

There were these beautiful metalworked walls in the halls of the Emirs, some with Koranic verses, others with Islamic geometric patterns. Shield, spears and drums as traditional symbols of status but also a plethora of newer objects of accolade. Plaques from various government institutions; totemic gifts from visiting scholars and business men; posters advertising the good work and patronage of the Emir himself. Muhammad told me the story of the first German settlers in the plateau, who tried and failed to get the Fulani to talk to them (they preferred to shoot them, and the mountain is pretty unassailable if those atop do not want you to climb). Until finally they rescued the wife of one of Muhammad’s ancestors, oh five or six generations ago, from slave traders who were making their way through to what is now Cameroon. The Germans refused to give her back, however, until Muhammad most senior agreed to be their envoy and to get the Mambilla to do a bit more talking and a bit less arrowing. As a token of this agreement, they gave him a German flag and a military plaque and said he could have his wife back when he had arranged talks. He went home, gave the items to the nearest keen looking lad and went and rescued her himself from the camp where they had hold of her, spending days singing her name until she finally came to the fence and he helped her over it. The enterprising young man who had accepted the tokens of the flag and plaque became the envoy and eventually became the First-Class Emir. The current Emir (Lamdo Gembu) still has them and they are now the token of office.

The many houses I have knelt in, then good naturedly been ordered by all to sit in a chair rather than kneeling on the floor, are now blurring into each other. Of course, making me take a chair is actually a kindness and great honour to a stranger but as I am so tiny I don’t actually fit on the big and grand chairs in the senior Emirs (Kings) chambers we have visited and thus it becomes slightly farcical. This photo is of HRH Lamdo Gashaka. Muhammed (to my left) was trying not to laugh at my little dangling little feet. 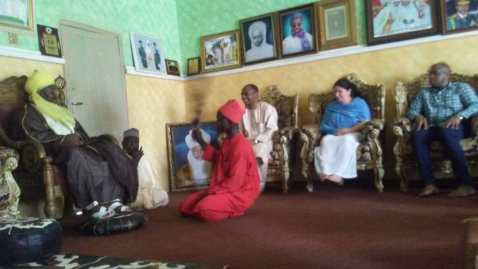 We started the day late, struggling to pull all the loose ends of the medical outreach together. An outreach is basically setting up a day long mobile clinic to offer primary care. We realised that we had been sent the wrong HIV rapid testing kits, so someone suggested we go over to the mission hospital and see if they had any spare they would give or sell to us. I have to say that I struggle a bit with the missionary fervour and, unfairly, I didn’t like Bob the director as well as I should have done. Muhammed and Mukhtar took it much better than I did, to my great discredit. Whether they are more used to it or more likely are less threatened by possible comparisons with my own medical colonialism that I, I’m not sure. However, my habit of gentle civility, despite the provocation, did actually pay off as we established a good rapport with them, I hope.

When we finally got to Kikara, a village in the Highland Tea Plantation there were more than a hundred people waiting. I started off dutifully dispensing (not a regulated profession here and therefore entirely within my remit on a business/volunteer visa) but I very soon got caught up in the clinical. I managed to excuse it to myself by a delightful encounter with the village health worker (called Community Health Extension Workers or CHEW) Mirabelle. I then taught her everything I could think of about midwifery in the time we had and supported her to do all the antenatal examinations, as she catches most of the babies round here.

You may think I’m being unnecessarily polite about my issues with working without in-country registration. But for once this is an actually boundary which one shouldn’t crossed and not a Phoebe ‘but what if I’m imposing’ insecurity. First and foremost, you have to be accountable and if you’re not registered you can’t be traced. Secondly, it’s wildly disrespectful to go to another country and work without the licensing you would expect were the local midwives to come to your own. Thirdly, I’ve seen a lot of damage done by ‘off piste’ medics over the years; safe and contextual is generally how you want your medicine.

One of the things I’ve always found hard about working abroad is the general air of gratitude from your patients; that you came all this way just for them. It is a very kind impulse and I know they mean it as praise. But I, knowing how unnecessary this work would be in the UK (for now at least, till they are prising the blue passports out of our cold dead hands after the last cache of bread and dripping is finally consumed) I just persist in feeling that they deserve much more than this, as does all of humanity. And then I feel even more guilty for feeling what I see as cultural patronising wank. “Such is the way in the life of an adventurer”, I guess, the choices don’t be easy.

Talking of receiving praise, there is a man, called a Praise Singer, who is employed by all Emirs to talk constantly about his grandeur and eminence. Most of the metaphors the Singers traditionally employ are animal related. As strong as an elephant, as kingly as a lion etc. It is the only time I have seen Muhammad irritated; a man normally so stoical you could dam a river with him. I think the bubbling anarchist below is unable to bear the obsequious fawning of such behaviour. So, I spent the evening saying ‘you’re as strong as a lion!’ every time he picked something up. He still likes me. Probably.

So, I showed Mirabelle how to diagnose twins by having a good feel (palpate in the technical terminology); showed her how to listen accurately to a few squirming foetuses, discussed birth; handed out a lot of ‘not bleeding to death is good’ drugs and generally wandered around being midwifely at people. I love being a midwife, it is something I really enjoy, and I’m glad I’m finding a way back into it at home too with the Sheffield Midwifery Cooperative. Then, after more Protocol visits we went back to the strangely moist hotel and ate. This was the first time I’d eaten tuwo (which is identical to the Malawian nsima, which I spent a year or more living on) in public and literally everyone took a photo. White girls may not be able to kneel, but it turns out they can gracefully eat tuwo and stew with their hands.